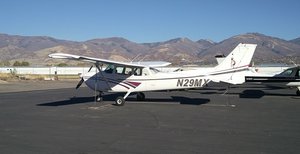 In the fall of 2016 I had decided that it was time to finally pursue my dream of becoming a private pilot. I spent hours doing research trying to figure out how I could accomplish my goal without having it cost me an arm and a leg. Everything I looked at pointed to aircraft ownership as the best way to save money and when I found a 1/10th share of a Cessna 172 listed for $1,500 I decided to jump on it. I had done my research, but now my real education was about to begin.

I can write other posts about my thoughts on shared aircraft valuation and the accounting that really should go into it, but it turned out that $1,500 was the right price for that airplane. After more than one cancelled flight due to maintenance problems I began my training in the spring on the same day that my partnership had its first meeting about splitting with the management company that appeared to have some unfortunately loose accounting practices.

I mention the accounting because I have particularly strong feelings about the importance of good accounting. I don't claim to be a master of the art, but I value a foundation of good record keeping and that was about to become my problem. You see, in that first self managed meeting of the now closed N29MX Partners LLC I was selected as the manager in charge of finances. My job would be to collect money from my fellow members for monthly membership dues and hourly use fees. With this money I was to pay for our various expenses such as tie down fees, maintenance costs, and scheduling software.

I had heard how much work collecting dues and fees from flying club members can be and given my day job as a professional nerd who is familiar with the importance of PCI compliance I wanted to do something to make my life easier. There was a deadline a few weeks away when I needed to be ready to collect fees from the new members so I started building a billing system that could integrate with Stripe for payment processing. I used the conceptual model of the paper flight tickets we would fill out at the time and created an interface where we could enter the details that were on our paper tickets. With a series of tickets entered it was then possible to run billing and generate invoices.

As I started to write my billing system I had two additional thoughts. First, surely I wasn't the only person who would need to do billing like this. And second, designing a multi-tenant system is much easier if you commit to it from the beginning.

TrackHobbs has a lot more features now. Even though I had high hopes for the longevity of N29MX Partners LLC we ended up having to sell the airplane before the summer ended due to a mountain of maintenance issues that were becoming airworthiness problems. Every month that went by while we were using it I found more things that I needed to improve to make it work better for what we needed. I added aircraft scheduling and document management so that we could share PDF files of important manuals and pictures of our weight and balance certificate.

After my first partnership shut down operations a few of us decided to try again with another airplane. We signed up the new partnership with TrackHobbs.com for all of our aircraft management needs and every time I discover a new use case that is important to our partnership or other use cases that will apply to a flying club that has members that are not equity holders I have added them.

Next month will mark 2 years since I started working on this project. It was born from dissatisfaction with the other options I was able to find when I searched for aircraft scheduling and billing tools for clubs and partnerships. No systems did what I wanted them to do well enough to be worth it so I built the system I wanted to use and added everything I thought someone would need in order to operate their club, partnership, or individually owned aircraft. I use it and doing so shows me of the things I should do to make it better. It isn't done, and as a rule, software never will be done, but what I have built definitely works for many use cases and I'm working on adding even more to help clubs and owners that I hope to be able to announce in the future.

If you need assistance don't hesitate to Contact Support at support@trackhobbs.com.